Contrary to popular belief, according to The Yale Law Journal data, the best time to submit publications in the spring cycle may be late February or even early March.

The Yale Law Journal reviewed its submissions data and found that the Journal’s experience is consistent with anecdotal reports that the spring submissions cycle is increasingly front-loaded, with a growing percentage of pieces submitted in the first half of February. However, this trend has not carried into the fall cycle, where submission ratios have remained relatively consistent across recent volumes.

The prevailing wisdom in the spring cycle appears to be “submit early.” However, from the Journal’s perspective, this approach does not offer any appreciable advantage.

[O]f the dozen or so publication offers that the Journal makes in the spring cycle, historically a majority have been made in March or later.

Also, authors should know about a possible downside to submitting early in the spring cycle: slower review times. The front-loaded cycle places a significant strain on the Articles & Essays Committee, and in most instances it takes several days—perhaps even a week—before an editor first reviews a new submission 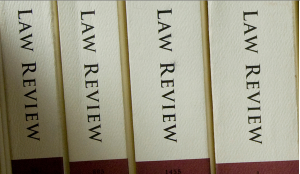 As mentioned over at the PrawfsBlawg when discussing the downside to submitting early, [a] more plausible and interesting possibility [rather than the strain it places] is that early submissions are disadvantaged because novice editors are not only deluged with submissions but relatively risk averse. At the start of the process, editors may be holding out hope for The Perfect Article and feel afraid of recommending acceptance of pieces that their colleagues or academic reviewers will regard as rubbish. By contrast, late-cycle editors know what kind of article they like and have a better sense of what is left in the by-then dwindling pool of submissions.

Food for thought during the upcoming submission cycle.

Jamie Baker is the Associate Dean & Director of the Law Library at Texas Tech University School of Law. She teaches Intro to the Study of Law, Civil Trial Research, & Academic Legal Writing, as well as sessions in the Legal Practice program and Excellence in Legal Research program. She blogs at www.gingerlawlibrarian.com. View all posts by Jamie Baker

Remember to sign up for Excellence in Legal Research Classes!
Today marks the first day of finals - we want all of our students to know that the library staff is here if you need anything! ❤️#WreckFinals
As the semester is quickly coming to an end, don't forget about this awesome resource the library has to offer. Finish strong everyone!
Clyde's face says it all, it's Spring Break!! ☀️Enjoy your long weekend with your (furry) friends everyone. #PetoftheWeek
This is Bonnie's attempt at ensuring her mom gets her good side for the pic. How cute is she?! 🥺🐾 Keep an eye out for Bonnie's sibling Clyde next week! #PetoftheWeek
After another long week, Simba is looking forward to taking the weekend for himself. 😎Encourages y'all to do the same. This gentle giant is our #PetoftheWeek!