The Harvard Business Review recently released the results of an enlightening new study about the speech patterns during SCOTUS oral arguments.

According to the article, a new empirical study shows that the male justices interrupt the female justices approximately three times as often as they interrupt each other during oral arguments. 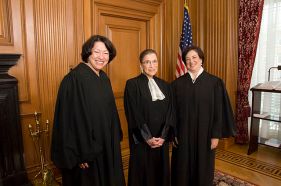 HBR ultimately found that women gradually learn to set aside such politeness. All four of the female justices have reduced their tendency to use this polite phrasing. Justice Sotomayor adjusted within just a few months. Justices O’Connor and Ginsburg gradually became less and less polite over decades on the court, eventually using the polite phrases approximately one-third as much as they did initially. Justice Kagan is still learning: She uses polite language more than twice as often as the average man, although half as often as she did in 2010.

Not surprisingly, HBR did not see a similar trend with the men, because male justices rarely use these polite speech patterns, even when they first enter the court. It is the women who adapt their speech patterns to match those of the men.

If it’s this bad for arguably some of the most powerful women in the world, imagine what it’s like for other women in the legal profession. We all need to be aware of this issue and do a better job of listening.

Jamie Baker is the Associate Dean & Director of the Law Library at Texas Tech University School of Law. She teaches Intro to the Study of Law, Civil Trial Research, & Academic Legal Writing, as well as sessions in the Legal Practice program and Excellence in Legal Research program. She blogs at www.gingerlawlibrarian.com. View all posts by Jamie Baker

Attention 1Ls! We hope you have been enjoying your first few weeks! The Law Library has "a short & happy guide" series to help you prepare for classes. Just bring your student i.d. to the circulation desk, and our staff will help you locate or check out these items!
CUTE PET WANTED
Are you a future 2L or 3L
We're kicking off the summer with Lola the law dog!!!
Good luck on your exams! The library will be here to assist you in any way we can throughout the next few weeks.
These are the study aids you skipped and found out later that they were fire.